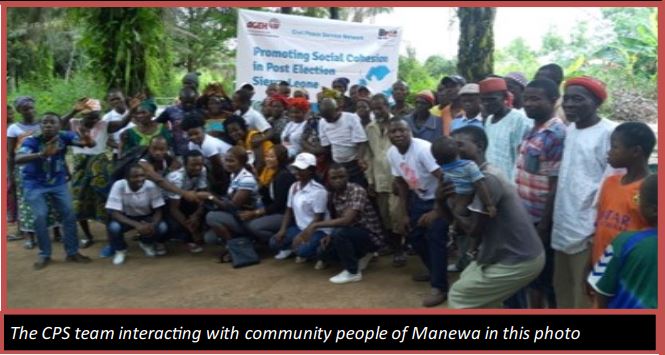 The Civil Peace Service (CPS) Network has in this year’s international peace Day celebration unified communities in the North after deep division and skirmishes ensued in these communities during the 2018 elections.

It could be recalled that during and after the elections, there were mass movement of people from one district to the other for fear of reprisal attacks. In some parts of the north, human faeces were smeared on houses of certain party supporters while some were physically at
tacked and beaten with property destroyed.
During a week-long celebration which spanned from the 10th to the 19th September, 2018 activities like community mediation meetings, stakeholders’ dialogue, music sensitization festival and media engagements were carried out in the Northern region of Sierra Leone.
These meetings were held in communities where tensions were eminent during the elections due to differences in political inclination.
During one of the meetings held in the Manewa community in the Bombali District, the Nurse in Charge of the Manewa Community Health Centre; Doris F. Macdonald recounted that during the elections campaign periods, some of the community people accused her of supporting the then opposition par ty and in some occasions, she was verbally threatened. This warranted her to abandon her health post after eleven years of manning it. When she returned to her original home in the South, stake holders met and pleaded with her to return and continue her work. The Nurse however managed to return but the community turned its back against her ever since. She said that the community did not accept her again as it was before the elections. “When someone get sick here or better say there is an emergency, the community would rather take that person to neighboring health centres. Nobody visits the health centre anymore just because the community which is predominantly the stronghold of then ruling All
People’s Congress Party” she said.
The Section chief; Pa Sheku Koroma confirmed that the nurse was indeed playing a lead role during the campaign periods as she was openly campaigning for the now ruling Sierra Leone People’s Party (SLPP). He noted that that was what warranted the community people to see the nurse as not one of them thereby declaring her as their enemy. Even though the chief blamed politicians for dividing them, the he cautioned that civil servants should not always show their political colors while executing their duties.

The Northern Region CPS Coordinator; Madam Salamatu Conteh told the people of Manewa and by extension Sierra Leone that the era of politics were over and it was time for the people to think of ways of developing the country. She explained that each and every member of the community has the right to belong to any political party of his or her choice. But that politics or colours should not warrant us to perceive ourselves as enemies. She pleaded with the community to see themselves as one and not to cast aspersion on one another.

According to Salamatu, one or two issues may have gone wrong dur ing the elections and that is why the CPS network is of the view that promoting social cohesion is the way to go in Sierra Leone. At the height of the meeting both parties were invited forward to further dialogue on the issue and to proffer lasting solutions to settling their impasse. The CPS team was able to reunite the community once more and after series of follow up activities, the team could confirm that peace had returned to the community and the health centre is again being utilize by the community people.